Hello! The intern is coming at you with some fresh new content. The main boss is currently too much in a funk to write anything, so he’s handed the content creation reigns to me. This is super exciting, as it’s the first time in the seven years I’ve been here that I get to give my unfiltered voice. See, mom? It took until I was 34, but I’ve made it as a writer.

Anyway, I was brainstorming what sort of content to write with this opportunity, and came to the conclusion that since I was able to find the job I love in this economy, I should give out advice as to how to get other people the jobs in the industries they love. That’s how I came up with the idea for “Breaking the Resumeta”.

What is a “resumeta”, you ask? It’s a combination of the words “resumé” and “meta”. I hope everyone reading is at least familiar with the concept of a resumé; it’s that document you give to would-be employers that outlines your skills, experience, and astrological sign.

The second term is a little trickier to explain. “Meta” is short for “metagame”. A metagame is a video game term. The direct definition of “metagaming” is to “use any strategy, action, or method that goes beyond the supposed limits of a game”. In abstract, that doesn’t make much sense, but I can break it down. See, in most competitive online games, the best players are all roughly at the same skill level. What differentiates them is what playstyle they choose since most online games are balanced around different playstyles competing against each other.

However, no one plays rock-paper-scissors randomly. Instead, each player tries to read the other’s mind to predict what the other person will “throw” so that they can pick the perfect counter “throw”. Like if one player noticed that the other player liked to throw paper after throwing rock, said player would probably throw scissors the next time they saw their opponent throw rock in anticipation of seeing paper. This sort of next-level thinking is called “metagaming”.

Going back to the rock-paper-scissors example, imagine if a fourth choice was added called “hammer”. Also, let’s just pretend that rock beat both paper and scissors, hammer beat rock, paper and scissors both beat hammer, and paper and scissors now tie. Because rock could beat half of the choices available, tie the third choice, and only lose to the fourth choice, it would have a 75% chance of not losing, and thus be a “tier 1” playstyle.

However, because of this, other players would expect more people to choose “rock” over any other choice, and thus more players would start to choose “hammer” in anticipation of an opponent choosing rock. These players are said to be making “counterpicks” as according to the “metagame”. As “hammer” starts to be used more, it becomes a “tier 1” choice despite losing to both paper and scissors and only earning a draw if both players choose hammer. In a heavy rock “metagame” the best players will choose “hammer” more often than 25% of the time even though in a “normal” metagame in which all four choices are used 25% it would be the worst choice. Below is another infographic that shows the new rock-paper-scissors-hammer meta based on this data.

I hope that explanation makes sense, because I’m here to “break the resumeta” in the same way the hammer would. What this means is that I’ll be looking at examples of the “tier 1” resumés that got members of the industry I’m covering their jobs, really study them, and then provide you guys advice as to how to one-up (gaming industry term!) those exact kind of resumés! Now, tier 1 resumés are whatever is on the first page of Google Images. Let’s see what “gaming industry resumés” are at the top of the tier lists. 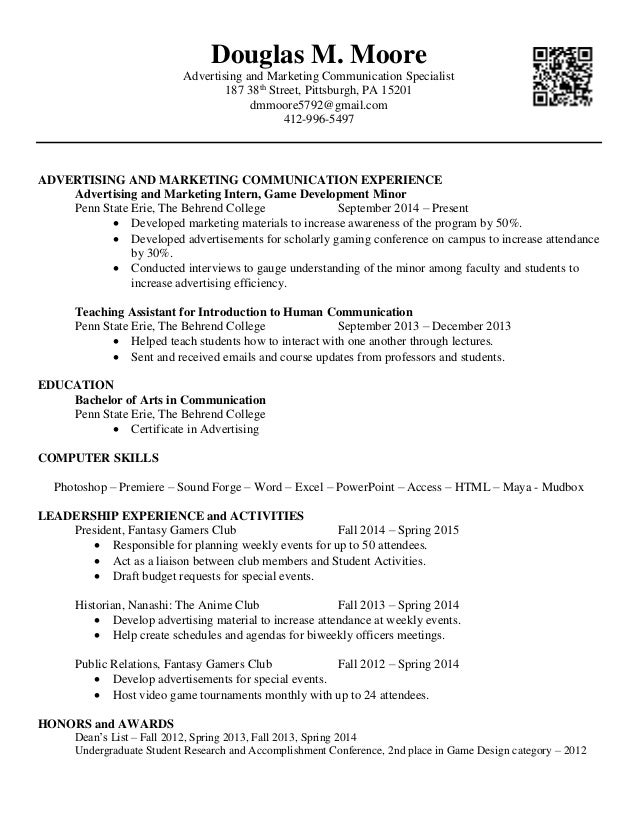 This is the very first resumé that shows up when you search “gaming industry resume”, and my god it could not be more boring. We can’t say for certain what job our friend Douglas was looking for, but based on the experience and education listed, it’s probably for a position as a game company’s historian. Which, despite the name, does advertising? Man, the anime club really screwed up its position-naming.

Now, as with all tier 1 playstyles, there are weaknesses in Douglas’ resumé that we can exploit to make our resumé stand out among the sea of similar resumés. The first place to start is the file name. I would bet 100 gil or zenny or coins or rupees that Doug named his file something boring like “Douglas M. Moore Advertising Resumé 2016”. Which is functional but so lame. You’re applying for the games’ industry, man! Spice it up. I recommend to name your resumés in the same format as a video game save file. My personal favorite type of save file formats are those classic RPG ones that go “File Name – Character Level – Time Played – Location”. Here’s an example of a good gaming industry resumé file name.

Already this hypothetical resumé is poised to break the resumeta! But now, 1000 words into this tutorial level (god, don’t you hate unskippable tutorials??? hit that like button if you agree), we finally get into the meat of the resumé. The resumeat, if you will. As I said earlier, a huge problem with Douglas’ tier 1 resumé is that it is so visually boring. Black and white, Times New Roman, and lacking anything that makes it stand out from literally every other resumé. No, if you want to work in the gaming industry, you have to prove your gaming chops from your font and color choice. Luckily, retro 8-bit font is in, so it’s gonna be super easy to impress your hopeful employers. Check out the naming header (using the great font from this link: https://dafont.com/8bit-wonder.font):

As a gamer, it’s very important to add in your gaming nickname in your headline. You don’t want to look like some n00b. Of course, a cool handle isn’t enough to prove your worth to the king–er, employer. Douglas’ resumé does the traditional thing of listing his “professional experience”, but you’re a gamer trying to get a gaming industry job! List the most relevant stuff: your gaming experience.

This is my old gaming resumé.

The next section in Douglas’ resumé lists his education. Obviously, this is important to the gaming industry, but instead of being impressed by dumb Ivy League schoolkids who got 4.0s, the gaming industry wants to know who taught you how to game. Let’s take a look at another typical example of what they want.

You’ll notice that part of the text has been colored yellow to make the important names and dates stand out in contrast with the more bland text below. That’s another part of our “tier 1” rival’s resumé I found lacking. His next section reads “computer skills”, but I think it’s far more important to list the most difficult skills in games you’ve been able to master. That’ll definitely stand out compared to everybody listing “Microsoft Office”, “Java”, or “Good with children”. Take a look:

Douglas continues his resumé with a section of miscellaneous jobs he held that he spun as “leadership experience”. You could do that, or you could break the meta by not talking about the times you were “on the board” of college extracurricular clubs in which the whole point of the “job” was for resumé filler. Let’s just skip to “awards and honors”. If you’re a true gamer, I don’t even need to tell you that the name of this section needs to be “achievements”. If done incorrectly, this section might be redundant with “gaming experience”, so take proper care to space out your storied gaming history like so:

Phew! I think we covered all the sections of Douglas’ resumé, but we aren’t out of the Deku Woods (gamer term) yet! The resumé is a definitely half of the boss key (gamer term), but the second half to the final boss is unlocked with the cover letter. Truly, it is the Super Mushroom (gamer term) that you’ll need to power up (gamer term) your application. I recommend making a couple of generic cover letters that outline your most relevant gaming experience with regards to the specific job you want. Then just replace the proper nouns as needed depending on what job/company you’re applying for. Here’s my typical cover letter:

Alright, now I think we’ve sufficiently busted the resumeta for the gaming industry. If such a 50-Cent Bulletproof (gamer term) resumé and cover letter can’t get you a job, the economy is way worse than I thought. If you do manage to get a job that actually pays and this guide helped you out, please hook me up. I always can get past the application stage but whenever I get interviewed by the gaming industry recruiters, they say that all my memes and jokes are from 2006.

I have a plethora of knowledge as to how to break the resumeta in any industry, not just video games, so if you have a suggestion as to which resumeta to break next, leave a comment. And the years of experience you have for leaving comments, so that I know what terrible suggestions I can easily filter out. Thanks for reading, and happy job hunting!

Making strained metaphors funny.
View all posts by pungry →
This entry was posted in Uncategorized. Bookmark the permalink.

2 Responses to Breaking the Resumeta: Applying for Game Industry Jobs